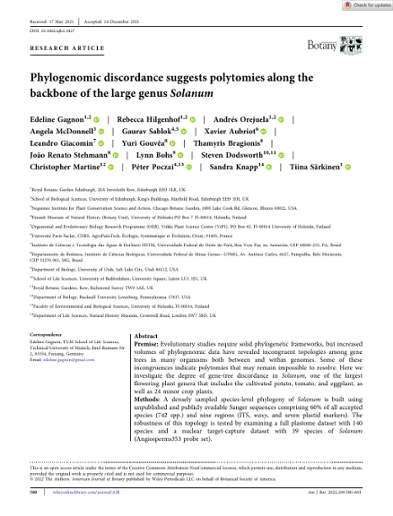 Premise: Evolutionary studies require solid phylogenetic frameworks, but increased volumes of phylogenomic data have revealed incongruent topologies among gene trees in many organisms both between and within genomes. Some of these incongruences indicate polytomies that may remain impossible to resolve. Here we investigate the degree of gene-tree discordance in Solanum, one of the largest flowering plant genera that includes the cultivated potato, tomato, and eggplant, as well as 24 minor crop plants. Methods: A densely sampled species-level phylogeny of Solanum is built using unpublished and publicly available Sanger sequences comprising 60% of all accepted species (742 spp.) and nine regions (ITS, waxy, and seven plastid markers). The robustness of this topology is tested by examining a full plastome dataset with 140 species and a nuclear target-capture dataset with 39 species of Solanum (Angiosperms353 probe set). Results: While the taxonomic framework of Solanum remained stable, gene tree conflicts and discordance between phylogenetic trees generated from the target-capture and plastome datasets were observed. The latter correspond to regions with short internodal branches, and network analysis and polytomy tests suggest the backbone is composed of three polytomies found at different evolutionary depths. The strongest area of discordance, near the crown node of Solanum, could potentially represent a hard polytomy. Conclusions: We argue that incomplete lineage sorting due to rapid diversification is the most likely cause for these polytomies, and that embracing the uncertainty that underlies them is crucial to understand the evolution of large and rapidly radiating lineages.