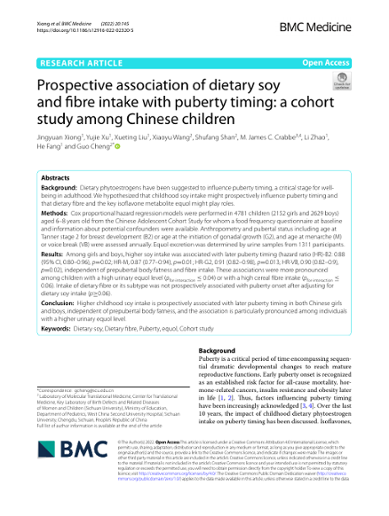 Background: Dietary phytoestrogens have been suggested to influence puberty timing, a critical stage for wellbeing in adulthood. We hypothesized that childhood soy intake might prospectively influence puberty timing and that dietary fibre and the key isoflavone metabolite equol might play roles. Methods: Cox proportional hazard regression models were performed in 4781 children (2152 girls and 2629 boys) aged 6–8 years old from the Chinese Adolescent Cohort Study for whom a food frequency questionnaire at baseline and information about potential confounders were available. Anthropometry and pubertal status including age at Tanner stage 2 for breast development (B2) or age at the initiation of gonadal growth (G2), and age at menarche (M) or voice break (VB) were assessed annually. Equol excretion was determined by urine samples from 1311 participants. Results: Among girls and boys, higher soy intake was associated with later puberty timing (hazard ratio (HR)-B2: 0.88 (95% CI, 0.80–0.96), p=0.02; HR-M, 0.87 (0.77–0.94), p=0.01; HR-G2, 0.91 (0.82–0.98), p=0.013; HR-VB, 0.90 (0.82–0.9), p=0.02), independent of prepubertal body fatness and fibre intake. These associations were more pronounced among children with a high urinary equol level (pfor-interaction ≤ 0.04) or with a high cereal fibre intake (pfor-interaction ≤ 0.06). Intake of dietary fibre or its subtype was not prospectively associated with puberty onset after adjusting for dietary soy intake (p≥0.06). Conclusion: Higher childhood soy intake is prospectively associated with later puberty timing in both Chinese girls and boys, independent of prepubertal body fatness, and the association is particularly pronounced among individuals with a higher urinary equol level.