The relationship between attention and consciousness: evidence for phenomenal overflow 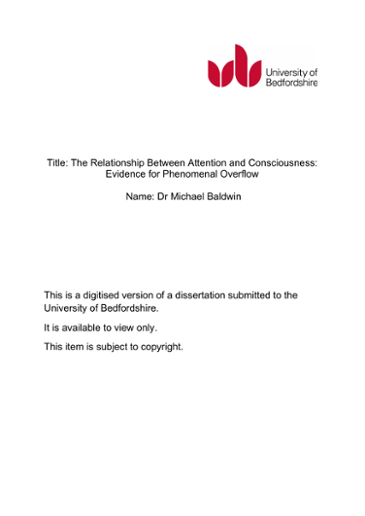 There is an ongoing debate in the study of consciousness regarding the relationship between consciousness and attention. While it is widely accepted that attention and consciousness are two distinct processes, the debate is over the nature of the relationship, does consciousness overflow attention? Four experiments were carried out to investigate the relationship between consciousness and attention, using a modification of the visual search paradigm, searching for a target in a display of non-targets and pressing a key to indicate whether the target was present or not present. The same Methodology was used in all for experiments with eye tracking, to monitor the direction of the gaze. A gaze contingent display was used to disrupt the allocation of attention under two of the experimental conditions. Participants were instructed to search for a given target under three conditions, Constant, Variable and Moveable. In the Constant condition, the target remained when a fixation was made. In the Variable condition, the target changed to a non-target just prior to fixation, changing back to the target when the gaze moved away. In the third, Moveable condition, the target moved to another part of the display when an attempt was made at fixation, with further relocations on subsequent attempts at fixation. It was hypothesised that under the Variable and Moveable conditions increased levels of cognitive engagement as measured by fixation and fixation durations would indicate awareness of the target while still resulting in a failure to report. Study One, involved a feature search, searching for a target that differed from the background by colour, looking for a light red block in a display of dark red blocks. Participants failed to report the presence of the target on around 50% of the trials. The results suggested that participants were making more effort to determine that the target was not present than correctly reporting the presence of the target. Study Two involved s second feature search for orientation. The target was an angled bar in a display of vertical bars. Findings were consistent with Study One, failure to report occurring on around 50% of the trials. Again, failure to report was accompanied by more fixations on the target than correct report, indicating that participants were aware of the target, but were unable to focus attention. Study Three involved a search for higher order properties in terms of shape or form. In this case, looking for an oval in a display of circles. The findings supported those of the first two studies. Failure to report on around 50% of the trials, with a failure to report being accompanied by more fixations of the target than correct report Study four employed a conjunction search, looking for a green circle in a display of yellow circles and green squares. While there were less failures to report than the previous studies, overall findings were the same. Participants were fixating on the target more times before deciding it was not there than correct report. Overall, the findings from all four experiments were broadly similar. Increased levels of engagement in the Variable and Moveable conditions than the Constant condition, for both correct and incorrect report. Further, incorrect report was associated with higher levels of engagement than correct report. This was interpreted as evidence that awareness can occur outside of focal attention, supporting the consciousness first position. Further, that a failure to report does not necessarily been a lack of awareness. This interpretation is open to possible alternative explanations, which are discussed.

A thesis submitted to the University of Bedfordshire, in partial fulfilment of the requirements for the degree of Doctor of Philosophy.