Understanding the nature and extent of an identifiable ‘mixed race’ [self] identity in Bedford: an exploratory study 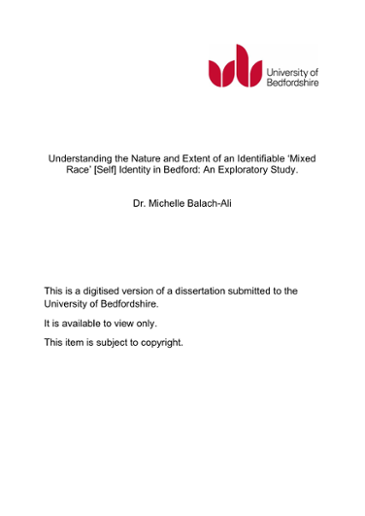 This empirical study focused on whether people of ‘mixed race’, White European and Black Caribbean heritage (and not the entire mixed race group), had a distinct cultural identity, and if so, how this identity was constructed. It explored two generations in Bedford, aiming to consider whether this Bedfordian sub-group possessed any form of recognisable cultural [self] identity, whether and how they identified themselves and each other, whilst considering how ‘others’ (Said, 2003) might relate to them. Theoretically, this study principally applied the philosophies of Stuart Hall (1996), and some of the work of Judith Butler’s (1990), to explore contrasting ideas regarding identity. Hall’s argument regarding cultural identities being constructed and controlled by the state has been especially important. This was allied with Butler’s (1990) adapted gender theory which suggests the subject has more autonomy over their choice of identity, specifying their gender (or in this case, their cultural identity) is not something one is born with, rather one becomes their gender. Various other theories were consulted, with considerable use of Tajfel’s Social Identity Theory (1969), which focuses on social grouping; it momentarily refers to Homi Bhabha’s (1994) ‘third space’ theory. The merging of Butler and Hall’s ideas, to create a lens to analyse mixed race and ‘mixed race’ identity, has also been deployed by Bettez (2010) although in a slightly different way. This study replaced Butler’s focus on gender, with ‘race’, considering whether a ‘mixed race’ individual can create, define or become their chosen racial identity in any way. The sample group, containing participants from two separate generations with various socio-economic life-styles, participated in qualitative semistructured interviews which aimed to consider if they shared behaviours and experiences that could be regarded as a shared cultural identity. The study focused on Bedford, as it is a cosmopolitan town with a significant population of Caribbean Windrush immigrants (ONS, 2011) and the third largest ‘mixed race’ (European/Caribbean) town population in the UK. It involved collecting qualitative data, by interviewing thirty individuals, from two sample groups, comprising of two different generations. This study specifically focussed on the ‘mixed race’ descendants of the Windrush migrants, to see if a ‘mixed race’ culture existed. The information was then analysed using inductive methods, in order to allow fluidity to answer the research questions. The study concluded that the ‘mixed race’ individuals sampled shared various life experiences, made some similar choices regarding identity and recurrently articulated their preferences regarding their personal identification and self-classification. Both samples consistently expressed themselves using positive language regarding their identity and lives in Bedford. The data demonstrated that they shared a range of behaviours, experiences and opinions regarding their cultural identities and all demonstrated interest in their personal ethnic diversity. The data also showed that the generational differences did not produce significantly different perspectives regarding identity. Based upon responses and accounts of integration and assimilation, the ‘mixed race’ participants seemed settled within, and ascribed a 'tolerant' outlook towards those ‘racially’ different to themselves and others. Overall, the samples predominantly thought that a ‘mixed race’ culture did exist, but found it difficult to articulate what it resembled or what it meant. This study brings an original contribution to knowledge based on the insight it provides regarding the third largest UK town (Bedford) population of ‘mixed race’ individuals and therefore a specific place and context for the ‘mixed race’ experience’. Firstly, it consulted ‘ordinary people’, outside of a university setting, during data collection. Secondly, it produced information that has challenged previous stereotypes and cultural assumptions related to ‘mixed race’ personal life choices, specifically related to the assumption that they automatically assimilate and experience ‘belonging’ in their Black community. The Bedford location also contests the negative stereotypes of ‘mixed race’ individuals being located in deprived areas, because unlike Hackney – which has the largest UK ‘mixed race’ population – and rated the lowest economic status in the UK, Bedford is roughly mid-way in the country in terms of economic status (ONS, 2019). Finally, the most interesting insight this research found was evidence to suggest that instead of turning towards one side of their heritage or the other, the ‘mixed race’ individuals interviewed were able to navigate amongst and assimilate into and between, the various cultures that they encountered competently, an action I have termed, ‘Cultural Negotiators’. This refers to their ability to weather various layers of racism, prejudices and colourism from the Black, White and other ethnicities – within their own homes, work places, communities and society in general - proficiently and successfully, making them avid ‘Cultural Negotiators’ – further explained later.

Balach-Ali, M. (2020) 'Understanding the Nature and Extent of an Identifiable ‘Mixed Race’ [Self] Identity in Bedford: An Exploratory Study'. PhD thesis. University of Bedfordshire.