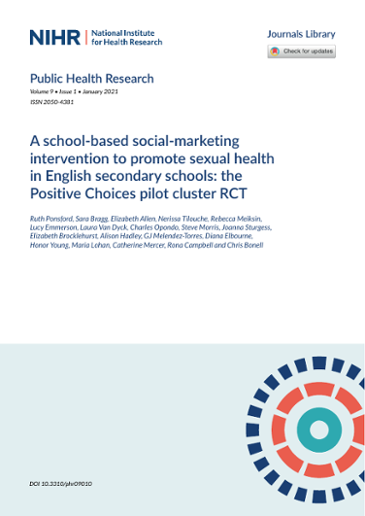 The UK still has the highest rate of teenage births in western Europe. Teenagers are also the age group most likely to experience unplanned pregnancy, with around half of conceptions in those aged &lt; 18 years ending in abortion. After controlling for prior disadvantage, teenage parenthood is associated with adverse medical and social outcomes for mothers and children, and increases health inequalities. This study evaluates Positive Choices (a new intervention for secondary schools in England) and study methods to assess the value of a Phase III trial. To optimise and feasibility-test Positive Choices and then conduct a pilot trial in the south of England assessing whether or not progression to Phase III would be justified in terms of prespecified criteria. Intervention optimisation and feasibility testing; pilot randomised controlled trial. The south of England: optimisation and feasibility-testing in one secondary school; pilot cluster trial in six other secondary schools (four intervention, two control) varying by local deprivation and educational attainment. School students in year 8 at baseline, and school staff. Schools were randomised (1 : 2) to control or intervention. The intervention comprised staff training, needs survey, school health promotion council, year 9 curriculum, student-led social marketing, parent information and review of school/local sexual health services. The prespecified criteria for progression to Phase III concerned intervention fidelity of delivery and acceptability; successful randomisation and school retention; survey response rates; and feasible linkage to routine administrative data on pregnancies. The primary health outcome of births was assessed using routine data on births and abortions, and various self-reported secondary sexual health outcomes. The data sources were routine data on births and abortions, baseline and follow-up student surveys, interviews, audio-recordings, observations and logbooks. The intervention was optimised and feasible in the first secondary school, meeting the fidelity targets other than those for curriculum delivery and criteria for progress to the pilot trial. In the pilot trial, randomisation and school retention were successful. Student response rates in the intervention group and control group were 868 (89.4%) and 298 (84.2%), respectively, at baseline, and 863 (89.0%) and 296 (82.0%), respectively, at follow-up. The target of achieving ≥ 70% fidelity of implementation of essential elements in three schools was achieved. Coverage of relationships and sex education topics was much higher in intervention schools than in control schools. The intervention was acceptable to 80% of students. Interviews with staff indicated strong acceptability. Data linkage was feasible, but there were no exact matches for births or abortions in our cohort. Measures performed well. Poor test–retest reliability on some sexual behaviour measures reflected that this was a cohort of developing adolescents. Qualitative research confirmed the appropriateness of the intervention and theory of change, but suggested some refinements. The optimisation school underwent repeated changes in leadership, which undermined its participation. Moderator analyses were not conducted as these would be very underpowered. Our findings suggest that this intervention has met prespecified criteria for progression to a Phase III trial. Declining prevalence of teenage pregnancy suggests that the primary outcome in a full trial could be replaced by a more comprehensive measure of sexual health. Any future Phase III trial should have a longer lead-in from randomisation to intervention commencement. Current Controlled Trials ISRCTN12524938. ; Vol. 9, No. 1. See the NIHR Journals Library website for further project information.