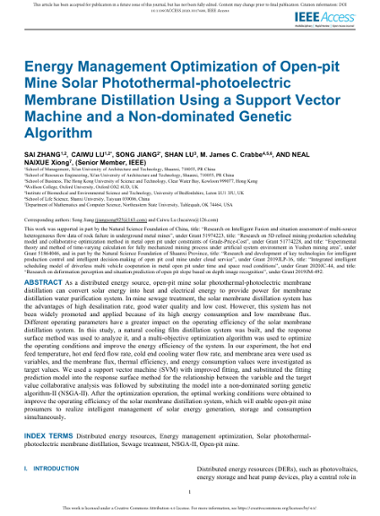 As a distributed energy source, open-pit mine solar photothermal-photoelectric membrane distillation can convert solar energy into heat and electrical energy to provide power for membrane distillation water purification system. In mine sewage treatment, the solar membrane distillation system has the advantages of high desalination rate, good water quality and low cost. However, this system has not been widely promoted and applied because of its high energy consumption and low membrane flux. Different operating parameters have a greater impact on the operating efficiency of the solar membrane distillation system. In this study, a natural cooling film distillation system was built, and the response surface method was used to analyze it, and a multi-objective optimization algorithm was used to optimize the operating conditions and improve the energy efficiency of the system. In our experiment, the hot end feed temperature, hot end feed flow rate, cold end cooling water flow rate, and membrane area were used as variables, and the membrane flux, thermal efficiency, and energy consumption values were investigated as target values. We used a support vector machine (SVM) with improved fitting, and substituted the fitting rediction model into the response surface method for the relationship between the variable and the target value collaborative analysis was followed by substituting the model into a non-dominated sorting genetic algorithm-II (NSGA-II). After the optimization operation, the optimal working conditions were obtained to improve the operating efficiency of the solar membrane distillation system, which will enable open-pit mine prosumers to realize intelligent management of solar energy generation, storage and consumption simultaneously.

Institute of Electrical and Electronics Engineers