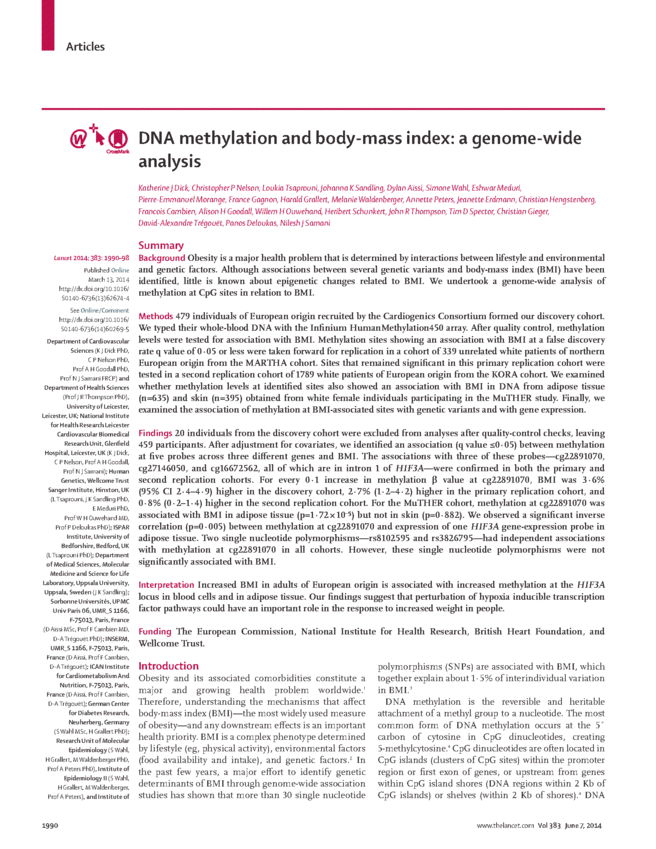 Background Obesity is a major health problem that is determined by interactions between lifestyle and environmental and genetic factors. Although associations between several genetic variants and body-mass index (BMI) have been identified, little is known about epigenetic changes related to BMI. We undertook a genome-wide analysis of methylation at CpG sites in relation to BMI. Methods 479 individuals of European origin recruited by the Cardiogenics Consortium formed our discovery cohort. We typed their whole-blood DNA with the Infinium HumanMethylation450 array. After quality control, methylation levels were tested for association with BMI. Methylation sites showing an association with BMI at a false discovery rate q value of 0·05 or less were taken forward for replication in a cohort of 339 unrelated white patients of northern European origin from the MARTHA cohort. Sites that remained significant in this primary replication cohort were tested in a second replication cohort of 1789 white patients of European origin from the KORA cohort. We examined whether methylation levels at identified sites also showed an association with BMI in DNA from adipose tissue (n=635) and skin (n=395) obtained from white female individuals participating in the MuTHER study. Finally, we examined the association of methylation at BMI-Associated sites with genetic variants and with gene expression. Findings 20 individuals from the discovery cohort were excluded from analyses after quality-control checks, leaving 459 participants. After adjustment for covariates, we identified an association (q value ≤middot&amp;05) between methylation at five probes across three different genes and BMI. The associations with three of these probes - cg22891070, cg27146050, and cg16672562, all of which are in intron 1 of HIF3A - were confirmed in both the primary and second replication cohorts. For every 0·1 increase in methylation β value at cg22891070, BMI was 3·6% (95% CI 2·9) higher in the discovery cohort, 2·7% (1·2) higher in the primary replication cohort, and 0·8% (0·4) higher in the second replication cohort. For the MuTHER cohort, methylation at cg22891070 was associated with BMI in adipose tissue (p=1·72×10) but not in skin (p=0·882). We observed a significant inverse correlation (p=0·005) between methylation at cg22891070 and expression of one HIF3A gene-expression probe in adipose tissue. Two single nucleotide polymorphisms - rs8102595 and rs3826795 - had independent associations with methylation at cg22891070 in all cohorts. However, these single nucleotide polymorphisms were not significantly associated with BMI. Interpretation Increased BMI in adults of European origin is associated with increased methylation at the HIF3A locus in blood cells and in adipose tissue. Our findings suggest that perturbation of hypoxia inducible transcription factor pathways could have an important role in the response to increased weight in people. Funding The European Commission, National Institute for Health Research, British Heart Foundation, and Wellcome Trust.