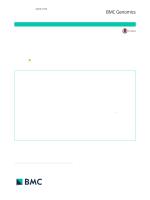 Background: Satellite DNA is a rapidly diverging, largely repetitive DNA component of many eukaryotic genomes. Here we analyse the evolutionary dynamics of a satellite DNA repeat in the genomes of a group of Asian subtropical lady slipper orchids (Paphiopedilum subgenus Parvisepalum and representative species in the other subgenera/sections across the genus). A new satellite repeat in Paphiopedilum subgenus Parvisepalum, SatA, was identified and characterized using the RepeatExplorer pipeline in HiSeq Illumina reads from P. armeniacum (2n = 26). Reconstructed monomers were used to design a satellite-specific fluorescent in situ hybridization (FISH) probe. The data were also analysed within a phylogenetic framework built using the internal transcribed spacer (ITS) sequences of 45S nuclear ribosomal DNA. Results: SatA comprises c. 14.5% of the P. armeniacum genome and is specific to subgenus Parvisepalum. It is composed of four primary monomers that range from 230 to 359 bp and contains multiple inverted repeat regions with hairpin loop motifs. A new karyotype of P. vietnamense (2n = 28) is presented and shows that the chromosome number in subgenus Parvisepalum is not conserved at 2n = 26, as previously reported. The physical locations of SatA sequences were visualised on the chromosomes of all seven Paphiopedilum species of subgenus Parvisepalum (2n = 26–28), together with the 5S and 45S rDNA loci using FISH. The SatA repeats were predominantly localisedin the centromeric, peri-centromeric and sub-telocentric chromosome regions, but the exact distribution pattern was species-specific. Conclusions: We conclude that the newly discovered, highly abundant and rapidly evolving satellite sequence SatA is specific to Paphiopedilum subgenus Parvisepalum. SatA and rDNA chromosomal distributions are characteristic of species, and comparisons between species reveal that the distribution patterns generate a strong phylogenetic signal. We also conclude that the ancestral chromosome number of subgenus Parvisepalum and indeed of all Paphiopedilum could be either 2n = 26 or 28, if P. vietnamense is sister to all species in the subgenus as suggested by the ITS data.