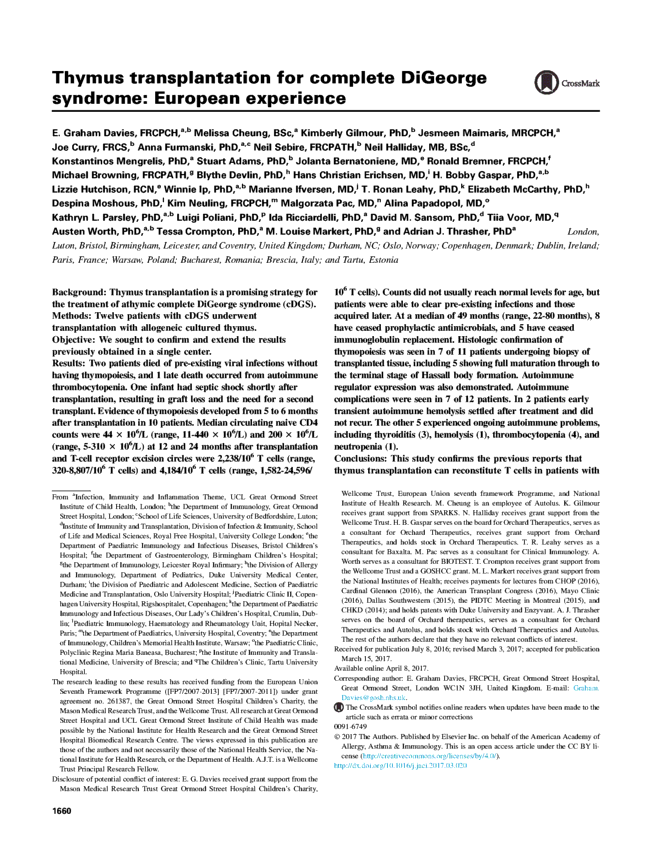 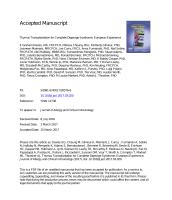 Background: Thymus transplantation is a promising strategy for the treatment of athymic complete DiGeorge syndrome (cDGS). Methods: Twelve patients with cDGS were transplanted with allogeneic cultured thymus. Objective: To confirm and extend the results previously obtained in a single centre. Results: Two patients died of pre-existing viral infections without developing thymopoeisis and one late death occurred from autoimmune thrombocytopaenia. One infant suffered septic shock shortly after transplant resulting in graft loss and the need for a second transplant. Evidence of thymopoeisis developed from 5-6 months after transplantation in ten patients. The median (range) of circulating naïve CD4 counts (x10663 /L) were 44(11-440) and 200(5-310) at twelve and twenty-four months post-transplant and T-cell receptor excision circles were 2238 (320-8807) and 4184 (1582 -24596) per106 65 T-cells. Counts did not usually reach normal levels for age but patients were able to clear pre-existing and later acquired infections. At a median of 49 months (22-80), eight have ceased prophylactic antimicrobials and five immunoglobulin replacement. Histological confirmation of thymopoeisis was seen in seven of eleven patients undergoing biopsy of transplanted tissue including five showing full maturation through to the terminal stage of Hassall body formation. Autoimmune regulator (AIRE) expression was also demonstrated. Autoimmune complications were seen in 7/12 patients. In two, early transient autoimmune haemolysis settled after treatment and did not recur. The other five suffered ongoing autoimmune problems including: thyroiditis (3); haemolysis (1), thrombocytopaenia (4) and neutropenia (1). Conclusions: This study confirms the previous reports that thymus transplantation can reconstitute T cells in cDGS but with frequent autoimmune complications in survivors.

Journal of Allergy and Clinical Immunology