Exercise-associated DNA methylation change in skeletal muscle and the importance of imprinted genes: a bioinformatics meta-analysis 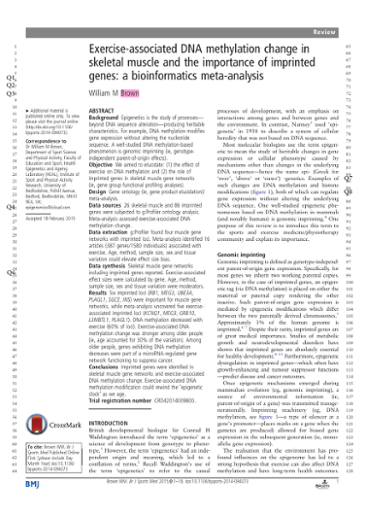 Using bioinformatics and meta-analytic tools, Dr Brown reveals that imprinted genes are involved in skeletal muscle gene networks and exercise-associated DNA methylation change. Brown finds that exercise-associated DNA methylation is stronger in older (compared to younger) individuals and may rewind the epigenetic clock. Numerous mediators were found that could affect the degree of exercise-associated DNA methylation change such as experimental design, sample size, gender, tissue and exercise type. A list of epigenetic candidate loci are developed that could help future researchers understand how exercise may activate tumour suppressor genes and deactivate growth loci amongst older individuals. Brown refers to this as an epigenetic adaptive response to antagonistic pleiotropy (i.e., when genes with multiple targets are beneficial at younger, but not older ages after selection has weakened). For further discussion of the findings see Dr Brown's blog https://sociogenomics.wordpress.com/2015/04/12/genomic-imprinting-human-skeletal-muscle-and-exercise-epigenetics/