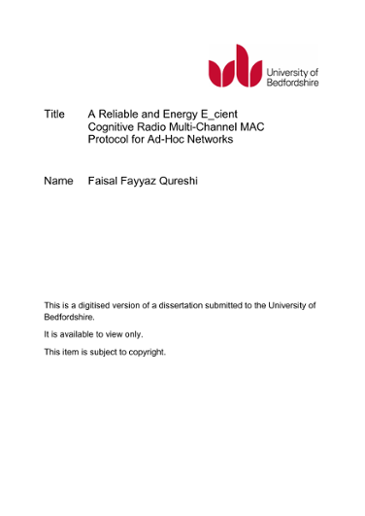 Recent research has shown that several spectrum bands are mostly underutilised. To resolve the issue of underutilisation of spectrum bands across the networks, the concept of Cognitive Radio (CR) technology was envisaged. The CR technology allows Secondary Users (SUs) to acquire opportunistic access to large parts of the underutilised spectrum bands on wireless networks. In CR networks, SUs may scan and identify the vacant channels in the wireless spectrum bands and then dynamically tune their receivers to identify vacant channels and transmitters, and commence communication among themselves without causing interference to Primary/Licensed Users (PUs). Despite the developments in the eld of CR technology, recent research shows that still there are many challenges unaddressed in the eld. Thus, there is a need to reduce additional handshaking over control and data channels, to minimise large sized control frames and to introduce reliable channel selection process and maintenance of SUs' communication when PUs return to a licensed channel. A fundamental challenge a ecting this technology is the identi cation of reliable Data Channels (DCHs) for SUs communication among available channels and the continuation of communication when the PU returns. This doctoral research investigates in detail how to resolve issues related to the protocol design for Cognitive Radio Networks (CRNs) on Medium Access Layers (MAC) for Ad-Hoc networks. As a result, a novel Reliable and Energy e cient Cognitive Radio multi-channel MAC protocol (RECR-MAC) for Ad-Hoc networks is proposed to overcome the shortcomings mentioned. After discussing the background, operation and architecture of CR technology, this research proposes numerous platforms and testbeds for the deployment of personal and commercial applications of the CRNs. Side by side, optimised control frames and a reduced number of handshakes over the CCH are suggested to extend the transmitting time for data communication. In addition, the reliable channel selection process is introduced instead of random selection of DCHs for successful data communication among the SUs. In RECR-MAC, the objective of every SU is to select reliable DCHs, thereby ensuring high connectivity and exchanging the successful data frames across the cognitive network. Moreover, the selection criteria of the DCHs are based on multiple factors, such as an initial selection based on the maximum free time recorded by the SUs over the DCH channel ranking, which is proportional to the number of positive/negative acknowledgements, and the past history of DCHs. If more than two DCHs have an equal value during the second, third and following iterations, then the DCHs are selected based upon the maximum free time. The priorities of the DCHs are then assigned based on Reliable Data Channels, that is, RDCH 1, RDCH 2, RDCH 3, and RDCH 4 respectively (where RDCH 1 and RDCH 2 have the highest priority, DRCH 3 and RDCH 4 have the next priority, and so on). The impacts of channel selection process and Backup Data Channel (BDC) over the proposed RECR-MAC protocol are analysed in combination with comparative benchmark CR-MAC protocols based on the timing diagrams proposed. Finally, the RECR-MAC protocol is validated by using a MATLAB simulator with PU impact over the DCHs, both with and without BDC, and by comparing results, such as communication time, transmitting energy and throughput, with benchmark CR-MAC protocols.

A thesis submitted in partial ful llment for the degree of Doctor of Philosophy in the Department of Computer Science and Technology, University of Bedfordshire