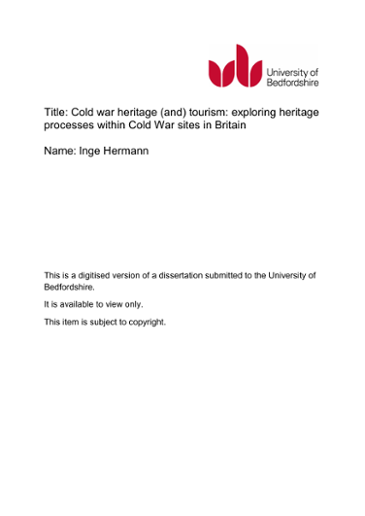 For most of the second half of the 20th century the world's political map was divided by the Cold War, a name given to the 40-year long standoff between the superpowers - the Unites States and the USSR - and their allies. Due to its geographical location and alliance with the United States, Britain was at the 'frontline' of the Cold War. As a response to increasing tensions, the British Government made arrangements by building hundreds of military sites and structures, which were often dismantled or abandoned as the technology on which they relied became rapidly ineffective. Nowadays, there is a growing (academic) recognition of Cold War sites and their new or contemporary uses, including as heritage attractions within a tourism context. This study has brought forward a constructionist approach as to investigate how heritage works as a cultural and social practice that constructs and regulates a range of values and ideologies about what constitutes Cold War heritage (and) tourism in Britain. It has done this by, firstly, exploring the dominant and professional 'authorised heritage discourse', which aims to construct mutually, agreed and shared concepts about the phenomenon of 'Cold War heritage' within a tourism context. The study identified a network of actors, values, policies and discourses that centred on the concept of 'Cold War heritage' at selected sites through which a 'material reality' of the past is constructed. Although various opposing viewpoints were identified, the actors effectively seem to privilege and naturalise certain narratives of cultural and social meanings and values through tourism of what constitutes Cold War heritage and the ways it should be manifested through material and natural places, sites and objects within society. Differences were particularly noticeable in the values, uses and meanings of Cold iii Cold War heritage (and) tourism War heritage within the contemporary context of heritage management in Britain. For some, the sites were connected with a personal 'past', a place to commemorate, celebrate or learn from the past. For others, the sites were a source of income, a tourism asset, or contrary, a financial burden as the sites were not 'old enough' or 'aesthetically pleasing' to be regarded as a monument to be preserved as heritage. Subsequently, the study also explored the (disempowered) role of visitors to the sites as passive receivers, leaving little room for individual reflections on the wider social and cultural processes of Cold War heritage. Although, most visitors believed that the stewardship and professional view of the Cold War representations at the sites should not directly be contested, this study has illustrated the idea that what makes places valuable and gives them meaning as heritage sites is not solely based on contemporary practices by a dominant heritage discourse. Despite the visitors' support for the sole ownership by site managers, and the selective representations of the Cold War and events, they did question or negotiate the idea of 'heritage' as a physical and sole subject of management practices. Despite having little prior knowledge about the Cold War era or events, by pressing the borders of the authorised parameters of 'Cold War heritage', visitors actively constructed their experiences as being, or becoming, part of their personal and collective moments of 'heritage'. By inscribing (new) memories and meaning into their identity, and therefore also changing the nature of that identity, they reflected upon the past, present and future, (some more critically than others. To conclude, understanding these discursive meanings of Cold War heritage (and) tourism, and the ways in which ideas about Cold War heritage are constructed, negotiated and contested within and between discourses also contributes to understandings about the philosophical, historical, conceptual and political barriers that exist in identifying and engaging with different forms of heritage.