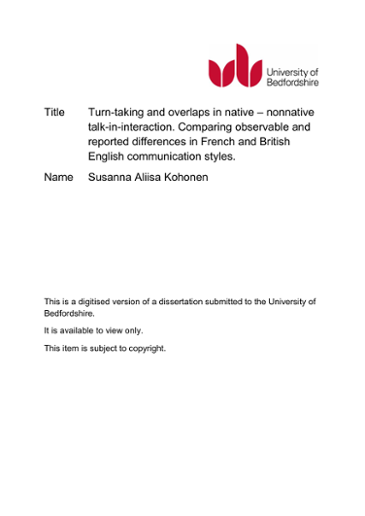 Participants in an intercultural situation of communication, trying to understand the intentions of their co-Iocutors from their own cultural perspective, can frequently commit misinterpretations that lead to misunderstandings of intention and meaning. Intercultural communication studies, for the majority, focus on unveiling and discovering differences that they believe to be at the core of such misunderstandings. Such studies have probed the varying cultural values, to mention a few, on the levels of individualism versus collectivism, of low-context versus high-context, of varying concepts of time or of silence (e.g. Hofstede 1980, Hofstede 1991, Hall 1959, Hall & HaU1990). The present study suggests that the perspective of one's primary socialisation culture should be studied on a more specific level if one is aiming to discover possible cultural differences. The level that is proposed to be studied is the production and interpretations of patterns of talk-in-interaction such as pauses, overlaps, speaker changes, simultaneous talk, prosody and intonation patterns, and so on. It is the stance of the present inquiry that these above-mentioned turntaking patterns play a key role in the processes through which the participants interpret each other's meanings and intentions, although the processes themselves remain mostly entirely subconscious. The present study was inspired by a case study that was conducted comparing the turn-taking behaviour between Americans and French conversing in French (Wieland 1991). Wieland conducted recordings of ordinary dinner table conversations, and later interviewed the participants in order to elicit insights into their interpretations of the interaction. However, little work has been done to further compare the culturally varying interaction patterns and the participants' reactions to them. The majority ofstudies into intercultural communication remain on more abstract levels of cultural values rather than addressing the actual arena of talk-in-interaction, although some have broken this unploughed ground, e.g. Moerman (1988) in his combination of conversation analysis and ethnography. The stance of the present study is that it is this very level of talk-in-interaction that holds the key to understanding what exactly happens in possible misunderstandings in situations of intercultural communication. Studies on talk-in-interaction focus on conversational turn-taking (Psathas 1995, Ten Have & Psathas 1995, Sacks, Schegloff & Jefferson 1974, Schegloff 2000). They therefore bring to light behavioural patterns - and their respective interpretations - that most of the time remain subconscious in the minds of the interactants, as those patterns are learned and internalised early on in the primary socialisation process (Berger & Luckmann 1966). Sample analyses on the conversational overlaps of French speakers carried out previously by the researcher (Kohonen 2000) served as a basis for the hypothesis development. These earlier analyses made evident the importance of gaining access to participants' perceptions on the interaction, as well as the access into parameters that allow a comparative approach. The present research is an exploratory, qualitative case study that allowed comparisons to be made between the overlap patterns of the native French and the native British English participants conversing in native and mixed groups, furthermore gaining access to participants' perceptions of the interaction. The present study is not intended to be taken as a strictly conversation analytical research, as the Literature Review will show. The aim of the present study is on the contrary to explore the possible theoretical and methodological triangulations available in the field of social sciences, and to discover how the triangulation of theories and methods could enhance the study of talk-in-interaction, in both native and intercultural settings.