Understanding the educational world of the child: exploring the ways in which parents' and teachers' representations mediate the child's mathematical leaming in multicultural contexts 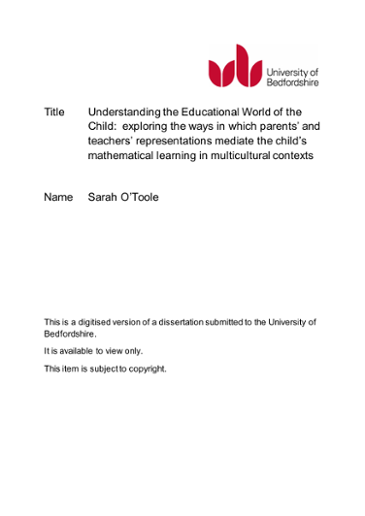 This study investigates the ways in which parents' and teachers' experiences and representations mediate their child's mathematics learning as they make the transition between home and school to either a multiethnic or mainly white school. In particular, it examines if the forms of mediation they adopt can shed light on the academic success of the child in school mathematics. The focus on mathematics learning has been chosen for the study because of its relative neglect, until recent times, to be seen as a subject influenced by cultural representations. Furthermore, there are significant implications in the relative neglect of understanding the achievement of ethnic minority pupils in mathematics. The research was framed by Vygotskian sociocultural theory and Wenger's (1998) communities of practice to explore the construction of meaning, identity and representations of practice. The amalgam of Wenger's communities of practice with sociocultural theory provided three key theoretical facets: (i) multiple levels of understanding in the form of meaning, practice and identity, (ii) the scope to explore the social and cultural worlds of the learner and (iii) understanding the ways that past experiences impact on current practice. Three different forms of qualitative data collection were used within the context of an ethnographic approach: (i) investigations in the form of classroom observations, (ii) in-depth semi-structured interviews and (iii) a child identity task. Twenty-two parents, eight teachers and fifty-eight children took part in the interviews, which form the main part ofthe data analysis. Out ofthese fifty-eight children, twenty-seven undertook the child identity task. The research took place in three schools with different ethnic make-up: a multicultural school, a mainly white school and a predominantly South Asian school. Two year groups were chosen, year 2 (ages 6/7 years) and year 6 (10/11 years), balancing high and low achievers. This study has provided data, which suggests that the way parents and teachers mediate the child's learning involves more than representations of mathematics. In making meaning of the mathematical, they draw on wider representations of the educational world, which include aspects like child development, notions of achievement, past experiences and the child's projected futures. This complex picture emerged from studying the highly interwoven aspects ofthe construction of meaning, identity and representations of practice. Representations of learning can be borrowed from both communities, providing the ethnic minority pupil with the potential to create hybrid representations of learning as they make the transition between home and school, which may be attributed a cultural status within the home. Each social actor has the potential to borrow from the home or school community to a greater or lesser degree. lfthe gap between the shared representations of the home and school are large, then this increases the likelihood of difficulties for the child in transition. However, the data suggests that even if the cultural representations of the home are very different from the school, the identification of high achievement and the engagement in mathematical activity at home can still provide success in learning. From the school community perspective, classrooms were represented by the teacher informants as 'cultureless' in both the multi ethnic and mainly white school. For example, in the multicultural school the teachers felt that there were so many ethnicities that differences were not visible. In the mainly white school, there were so few ethnic minority children that teachers also struggled to identify issues of culture. In the predominantly South Asian school, issues surrounding culture were brought to the forefront of the teacher discourse. However, in many ethnic minority homes, parents described how culture was influential in mediating representations ofleaming. This has implications in the educational arena with respect to the teachers' understanding of the transitional process that ethnic minority children undergo and the levels of visibility that culture and ethnicity is given in the school community.

O'Toole, S. (2004) 'Understanding the educational world of the child: exploring the ways in which parents' and teachers' representations mediate the child's mathematical leaming in multicultural contexts'. PhD thesis. University of Luton.

Dissertation submitted for the degree of Doctor of Philosophy