Welfare and responsibility: a qualitative study of the demise of social morality and the rise of personal ethics in welfare discourses 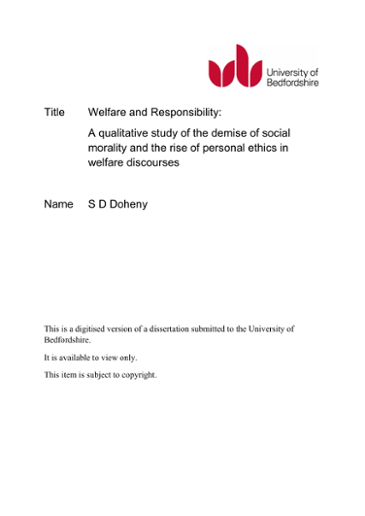 Much attention has been devoted in the social sciences to the reorganisation of the moral order of society (Smart, 1999). This reorganisation means that responsibility for welfare is now located with the individual. In spite of the salience given to privately held responsibility for welfare in social policy, little work has been carried out on the discourses underpinning this way of distributing responsibility (Finch and Mason, 1993, Duncan and Edwards, 1999, Rowlingson, 2002). Work on this issue is especially timely as New Labour continues the privatisation of responsibility for welfare in a way that, many people believe, neglects a moral dimension. Instead, New Labour favours a more ethical construction that exhorts the individual to do her duty by which they mean she should work for her own betterment and well-being (Levitas, 1998, Giddens, 1998, Jordan, 1998, Lund, 1999). This work begins by situating responsibility as a historically variable and discursive construction, uncovering how the understanding of responsibility changed as the problem focusing the minds of social engineers altered from one of poverty to one of security in the 1970s. While responsibility has only recently been identified as a particular issue for social policy academics (Roche, 1992, Dwyer, 1998, Dean et aI., 2004) philosophers and sociologists have paid close attention to responsibility over the past decade (Bauman, 1993, 1995, Habermas, 1990, 1995, Apel, 1989, 1996, Etzioni, 1995, Schmidtz, 1998, Goodin, 1998). Building on the issues raised by these authors, this work presents a qualitative study of government press releases, interviews with benefits recipients, members of the general public, welfare advisors and welfare benefits administrators to explore the rational structure of the discourses of responsibility for welfare. As a result, I develop the argument that while the reconfigured moral order promotes a private acceptance of responsibility for welfare, people still want a way of interpreting responsibility taking in a more public way.

Doheny, S.D. 'Welfare and responsibility: a qualitative study of the demise of social morality and the rise of personal ethics in welfare discourses'. PhD thesis. University of Luton.