Social policy and public health measures in Bedfordshire, within the national context, 1904-1938 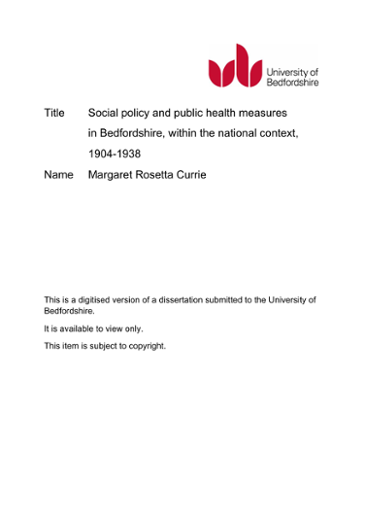 This thesis examines some social policies and public health measures in the small county of Bedford, within the national context, 1904-38. No other such study exists which covers these aspects; it will, therefore, fill a gap in the body of knowledge. At this time, national and imperial needs for a healthy British race were paramount in the minds of politicians and social reformers, particularly in the face of competition for industrial and military supremacy from other powers, including Germany and the United States of America. Certain key themes permeated this era: the changing functions of local and central government, the role of the state and voluntary sectors, and a medical profession divided between those employed in preventive medicine, and those in private practice. However, war, the preparation for war and its after effects have been found to be the most significant factors. George Newman (1870-1948), figures large, because he played a major part in public health initiatives, firstly, as part-time County Medical Officer of Health to Bedfordshire County Council (1900-07), and then at central government level, as Chief Medical Officer of the Board of Education (1907-35), and of the Ministry of Health (1919-35). Two methodological tools were used in this thesis. Historical research was carried out using, mainly, primary source material, and an empirical study was undertaken using a descriptive case study approach. These methods enabled the collection of quantitative and qualitative data and helped to determine both the final content, and the form in which the research was presented. Chapter 1, the Introduction, provides a background to the key figures and themes discussed and describes the intra-county differences in Bedfordshire. Chapter 2 concerns infant mortality, as it is an indicator of the health ofthe whole community. Chapter 3 describes the health of school children, because the Government was particularly anxious about their condition, as they would be needed for industrial and imperial expansion, and in the event of war. Chapter 4 concerns the welfare of children. It provides examples of how the state and voluntary sectors strove to preserve child life, despite problems such as orphanhood and cruelty, and yet still attempted to meet the needs of the British Empire for labour. Chapter 5 discusses women's health, as it was relatively neglected by central government in this period. It takes the form of a case study and makes use of oral testimony from a cohort of 84 women who lived in Bedfordshire in the inter-war years. Chapter 6, the conclusion, examines the effect of war, the role played by the voluntary and state sectors, and the divided medical profession. It also considers the extent to which Bedfordshire led, or lagged behind national social policies and public health measures, and the progress made towards a healthier nation until 1938, the last full year of peace in Europe before the outbreak of World War II.

A thesis submitted to the Faculty of Health Care and Social Studies, University of Luton, in partial fulfilment of the requirements for the degree of Doctor of Philosophy