Increased incidence of anti-GBM disease in Fcgamma receptor 2b deficient mice, but not mice with conditional deletion of Fcgr2b on either B cells or myeloid cells alone. 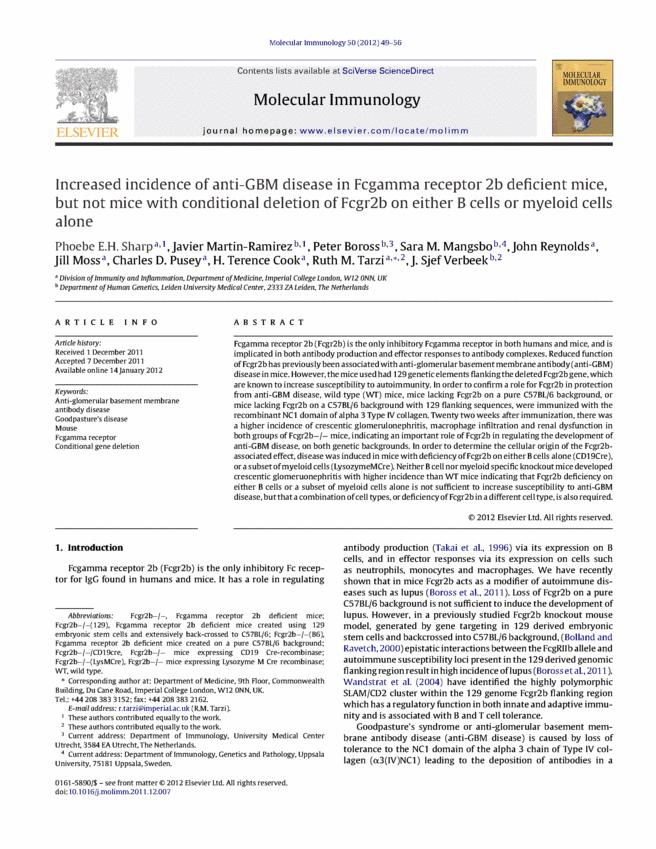 Fcgamma receptor 2b (Fcgr2b) is the only inhibitory Fcgamma receptor in both humans and mice, and is implicated in both antibody production and effector responses to antibody complexes. Reduced function of Fcgr2b has previously been associated with anti-glomerular basement membrane antibody (anti-GBM) disease in mice. However, the mice used had 129 genetic elements flanking the deleted Fcgr2b gene, which are known to increase susceptibility to autoimmunity. In order to confirm a role for Fcgr2b in protection from anti-GBM disease, wild type (WT) mice, mice lacking Fcgr2b on a pure C57BL/6 background, or mice lacking Fcgr2b on a C57BL/6 background with 129 flanking sequences, were immunized with the recombinant NC1 domain of alpha 3 Type IV collagen. Twenty two weeks after immunization, there was a higher incidence of crescentic glomerulonephritis, macrophage infiltration and renal dysfunction in both groups of Fcgr2b-/- mice, indicating an important role of Fcgr2b in regulating the development of anti-GBM disease, on both genetic backgrounds. In order to determine the cellular origin of the Fcgr2b-associated effect, disease was induced in mice with deficiency of Fcgr2b on either B cells alone (CD19Cre), or a subset of myeloid cells (LysozymeMCre). Neither B cell nor myeloid specific knockout mice developed crescentic glomeruonephritis with higher incidence than WT mice indicating that Fcgr2b deficiency on either B cells or a subset of myeloid cells alone is not sufficient to increase susceptibility to anti-GBM disease, but that a combination of cell types, or deficiency of Fcgr2b in a different cell type, is also required.